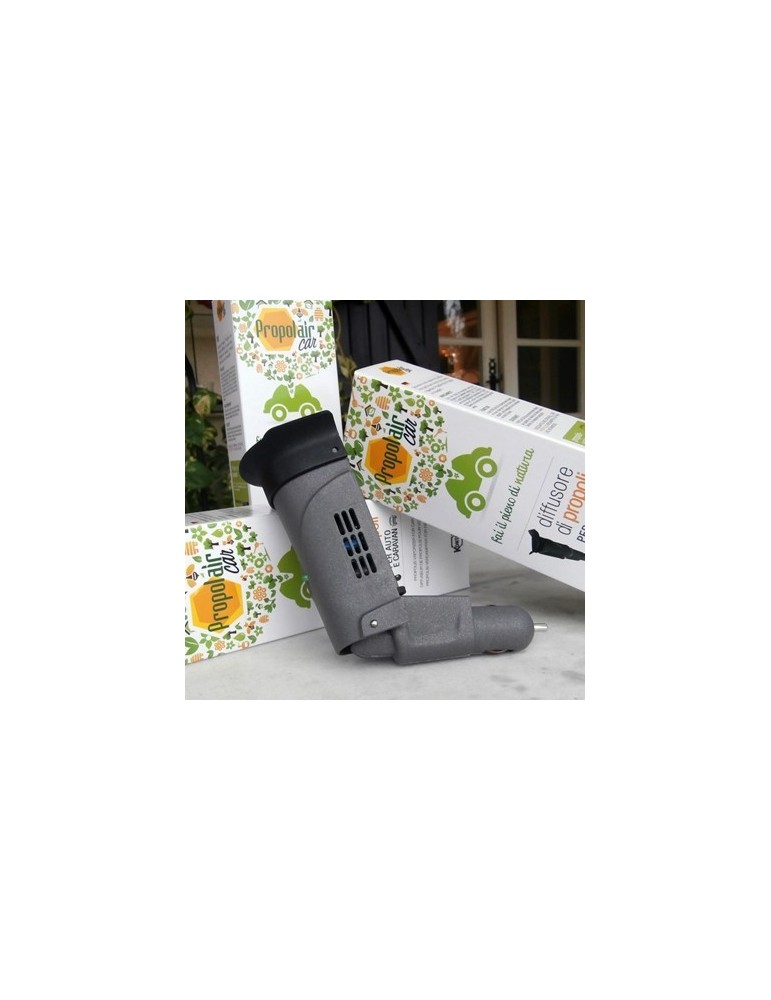 Propolair Car propolis vaporizer protects you while you drive, filtering air pollution by 70%!! Clear the air and boost your health!!! Recommended for taxis, buses, motor homes, limousines, even ambulances. When in contact with people coughing and sneezing, sanitize your vehicle and protect yourself from flus and viruses with all-natural antibacterial, antiviral propolis!

Plug it into any cigarette lighter socket and with a 100° articulated base, it can adapt to any installation.

The Propolair Car propolis vaporizer / diffuser sanitizes the air and filters out air pollution with a natural product from the beehive. Propolis, with its multitude of flavonoids are diffused into the air, going into action, doing what they do best, killing bacteria and molds. Proven effective as an all natural antibacterial, antiseptic, antifungal agent.

Why expose yourself to air pollutants when commuting in urban traffic where pollution levels are high and filled with carcinogens? Not only does it filter the air but the pleasant scent of propolis, honey and beeswax fills the vehicle with a freshness not found anywhere else except in a beehive! "...propolis is a very effective antibacterial and anti-inflammatory agent. It's antiseptic capacities are effective against numerous bacteria, viruses and fungi...

For the human condition, a propolis vaporizer is the perfect natural solution to aid those with respiratory ailments and protecting and boosting the immune system. Best of all, it is totally complementary with other treatments... I personally prefer the car vaporizer, as propolis is more directly concentrated inside the car and I can breath it while driving..."

Propolair Car also cleans the air of a wide spectrum of air pollutants by up to 70%! As stated by the US Health & Human Services, car exhaust contain carcinogens harmful to humans and animals. Recent studies indicate that exhausts generate free radicals which linger indefinitely. The recent USA Today article, states "air pollution causes cancer" and is more dangerous than second-hand smoke. The French newspaper, Le Parisien, reported June 5 2012 "diesel fumes to be as dangerous as asbestos, contributable to pulmonary illnesses and deaths"... A study conducted in Paris, France found the air inside the car had extremely high levels of pollutants, a veritable 'funnel' to the fumes from the traffic ahead of the driver and NO protection available.

A report from The World Health Organization (WHO), has declared air pollution responsible for 7,000,000 premature deaths annually!

Independent test results from Tallahassee, Florida
by Dr. G. Case www.advancedmedclinic.com
1) photo on left was an airborne sample of my 1999 Saturn's air (while driving).
2) I did not vacuum my car floors or seats before or after these mold testing
3) the mold test kit can be purchased at Home Depot for $10, it is called Mold Testing by ProLabs (also can be ordered on the Internet, but you have to pay extra for shipping).
4) photo on right was taken after using the propolis for two days. Absolutely no evidence of any mold growth, not even a small pin-sized colony.

A month earlier, I did the same test in my wife's car, and got rid of the airborne bacteria. I could not believe it, so I tested twice, still no mold growth. Furthermore, since we ran out of the first little container of propolis (i.e., vaporized it into the car interior), I tested her car again after one month of non-use of the propolis, an still no evidence of airborne bacteria mold growth. Evidently the stuff gets stuck in the car's air circulation filter and keeps on working. I will keep testing every month until I get some evidence of bacterial growth. And I will let you know my results.
GC Sept 29, 2009

See our blog for more details on Propolis.

Click here for a complete review of the scientific and clinical studies conducted on Propolair vaporizers with Italian propolis.

Probably one of my favorite out of all the great products here. Again, not my favorite by much because everything here is great but love how it helps me tolerate being in the car a bit better.